You are in : All News > Weekly Roundup: Agri-tech partnership boosts cow nutrition and Slow Food and FAO teach Syrian women the art of Italian cuisine

30 Aug 2019 --- This week in industry news, Slow Food, an Italian global organization promoting local food and traditional cooking, alongside the Food and Agriculture Organization of the United Nations (FAO), has organized a study tour in northwest Italy for a group of Syrian small-scale female farmers. Meanwhile, feed management platform InTouch and UNIFORM-Agri, a provider of herd management software, have announced a new data-sharing collaboration, which aims to empower dairy farmers with cutting-edge insights and herd management tools.

In brief: Initiatives
Slow Food, an Italian global organization promoting local food and traditional cooking, alongside the Food and Agriculture Organization of the United Nations (FAO), has organized a study tour in northwest Italy for a group of Syrian small-scale women farmers. The two organizations have teamed up to enhance the skills of small-scale female food producers from Syria – with the aim of supporting crisis-affected communities to regain or boost their livelihoods and reviving the country's agriculture sector. The Slow Food Presidia projects help artisan food producers and farmers across the globe safeguard their food and agricultural heritage. The Syrian women will meet farmers from six such Presidia projects focused on producing: butter of high Elvo Valley, extra-virgin olive oil, high mountain honey, Robiola (cheese) di Roccaverano, Sambucano lamb and Vessalico garlic. The women come from Homs, Hama, Lattakia, Tartous, Aleppo, Sweida and Al Qunatra governorates, and are each engaged in producing one type of local food – one product per each village – from dried figs to honey.

Feed management platform InTouch and UNIFORM-Agri, a provider of herd management software, have announced a new data-sharing collaboration, which aims to empower dairy farmers with cutting-edge insights and herd management tools. Each day, InTouch manages the feeding of over 300,000 cows in 37 countries worldwide. As part of the animal health and nutrition company Alltech, InTouch puts particular focus on providing farmers and nutritionists with the most relevant insights and analytics for delivering optimum nutrition to the herd. Creating a link between InTouch and UNIFORM-Agri’s herd management platform to automatically share herd data will further enhance the value of insights that can be provided, the companies state. This collaboration will also reduce the need for manual input of data and ultimately enable both farmers and nutritionists to work together to make more informed herd-management decisions.

In brief: Acquisitions
US specialty food producer Stonewall Kitchen has entered into an agreement to acquire Vermont Village, a producer of Organic Applesauce and Apple Cider Vinegar products. The transaction is anticipated to be completed in September. Financial terms of the acquisition have not been disclosed. 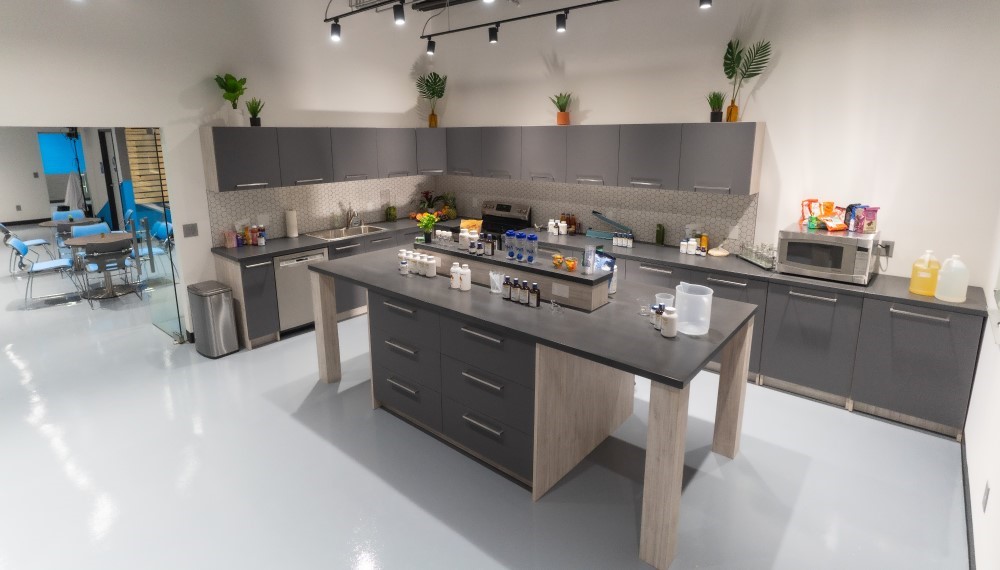 Click to EnlargeFONA Interational’s conceptualized facility in Irvine, California, US.
Illinois, US-based FONA International is opening a new facility in Irvine, California. The location includes laboratory space for flavor creation and applications as well as meeting and educational spaces. The California location joins a list of other FONA locations and partnerships around the world, including China, Canada, Australia and the UK. The grand opening in California comes a year after the company announced a US$14 million expansion at its headquarters in Geneva, Illinois.

Campbell Soup Company has appointed Mick Beekhuizen as Senior Vice President and Chief Financial Officer, effective September 30, 2019. Beekhuizen will lead Campbell’s finance function, including tax, treasury, audit, investor relations, external development, corporate financial planning and analysis and financial systems, as well as the company’s information technology group. Beekhuizen will report to Mark Clouse, Campbell's President and CEO, and become a Corporate Officer and a member of the Campbell Leadership Team. He succeeds Anthony DiSilvestro, who is leaving Campbell on October 15, 2019, to pursue other interests. Beekhuizen was Executive Vice President and Chief Financial Officer at Chobani since 2016, where he led the improvement of the company's capital structure and supported its growth and expansion. Before Chobani, he was Executive Vice President and Chief Financial Officer for Education Management Corporation, and a Managing Director at Goldman Sachs in the Merchant Banking division.

In brief: New product launches
Moon Cheese, a producer of crunchy cheese snacks, has announced a brand relaunch that includes new packaging, new names for existing products and the debut of two new varieties. The savory on-the-go snack is marketed towards health-conscious consumers and time-starved snackers. Moon Cheese offers more than 10 grams of protein, no sugar and less than two grams of carbs per one-ounce serving. The 100 percent crunchy cheese snack does not require refrigeration. Available in resealable bags, the snacks are touted by the brand as ideal for consumption on their own or in salads, soups or any favorite dish in need of a flavor or texture burst.

Zatarain’s, a food and spice company based in New Orleans, Louisiana, US, has expanded its range of “easy, flavorful and better-for-you” rice mixes. The brand’s new Garden District Kitchen brown rice and bean mixes take ten minutes to prepare and offer at least nine grams of plant-based protein and 11 grams of fiber per serving. All five flavors within the line are marketed as gluten-free and free-from artificial flavors, colors from artificial sources and added MSG. The mixes are inspired by the international influences that have shaped New Orleans cuisine including French, Spanish, Italian, and Latin flavors.

2020 The Year of Plant Health: FAO raises awareness on plants’ importance for nutrition

04 Dec 2019 --- The Food and Agriculture Organization (FAO) is naming 2020 the UN’s International Year of Plant Health (IYPH). The move aims to raise global awareness on how... Read More