You are in : All News > New report reveals salmonella cases no longer falling in the EU 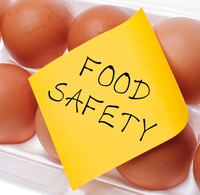 12 Dec 2017 --- The declining trend of salmonellosis cases in the EU has leveled off according to the annual report on zoonotic diseases published this week. Cases of Salmonella Enteritidis acquired in the EU have increased in humans by 3 percent since 2014 says the report, which is compiled by the European Centre for Disease Prevention and Control (ECDC) and the European Food Safety Authority (EFSA). In laying hens, the prevalence increased from 0.7 percent to 1.21 percent over the same period.

“The increase shown by our surveillance data is worrying and a reminder that we have to stay vigilant,” said Mike Catchpole, ECDC’s Chief Scientist. “Even in a state of high awareness and with national control programs for S. Enteritidis in place, there is a need for continuing risk management actions at the Member State and EU level,” he added.

Marta Hugas, EFSA’s Chief Scientist, said: “The decrease of Salmonella has been a success story in the EU food safety system in the last 10 years. Recent S. Enteritidis outbreaks contributed to a change in this trend in humans and poultry. Further investigations by competent authorities in the field of public health and food safety will be crucial to understanding the reasons behind the increase.”

There were 94 530 human cases of salmonellosis reported in the EU in 2016. S. Enteritidis – the most widespread type of Salmonella, accounted for 59 percent of all salmonellosis cases originating in the EU and is mostly associated with the consumption of eggs, egg products and poultry meat.

Campylobacter and listeria
Campylobacter, the most reported food-borne pathogen in humans, was detected in 246,307 people, an increase of 6.1 percent compared with 2015. Despite the high number of cases, fatalities were low (0.03 percent). Levels of Campylobacter are high in chicken meat.

Listeria infections, which are generally more severe, led to hospitalization in 97 percent of reported cases. In 2016, listeriosis continued to rise, with 2,536 cases (a 9.3 percent increase) and 247 deaths reported. Most deaths occur in people aged over 64 (fatality rate of 18.9 percent). People over 84 are particularly at risk (fatality rate of 26.1 percent). Listeria seldom exceeded legal safety limits in ready-to-eat foods.

In contrary to this report, just this week, news broke of dairy group, Lactalis’ baby milks being recalled worldwide after possible salmonella contamination. You can read the full story here.

03 Dec 2019 --- In a bid to sustain biosecurity across its agri-food supply chain, the UK will implement EU Smarter rules for safer food (SRSF) regulations on December 13, 2019.... Read More

02 Dec 2019 --- In a series of leaked official documents released to the public on discussion website Reddit, collateral interests of the US government in Brexit negotiations are... Read More

15 Nov 2019 --- China has made a decision to lift its four-year ban on poultry imports from the US, signaling new trade opportunities for North American chicken. The ban was first... Read More