You are in : All News > Blockchain and black swans: Food defense scares highlight the technology’s potential, say Irish researchers 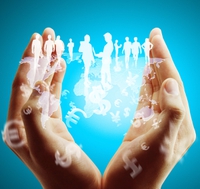 18 Dec 2018 --- Blockchain technology provides an opportunity to bring greater efficiency, transparency and traceability to the exchanges in food supply chains and has the potential to play a key role in protecting food integrity, however, it is only part of the solution. This is according to Dr. Seamus O’Reilly from the Cork University Business School, who spoke about the opportunities and challenges for using blockchain in the Irish agrifood sector in light of a recent safefood funded collaborative University College Cork-Teagasc research project.

Events in recent years, such as the sale of horsemeat as beef, the deliberate contamination of strawberries with needles in Australia and the sale of Accord potatoes as early Queens in Ireland, highlight the topicality of the related issues of food fraud and food defense. All food businesses are exposed to such supply chain threats and vulnerabilities. If not prevented or adequately responded to, these may result in illness and death, as well as in economic and reputational damage to individual companies, and indeed the wider food industry. Blockchain may be part of the solution. 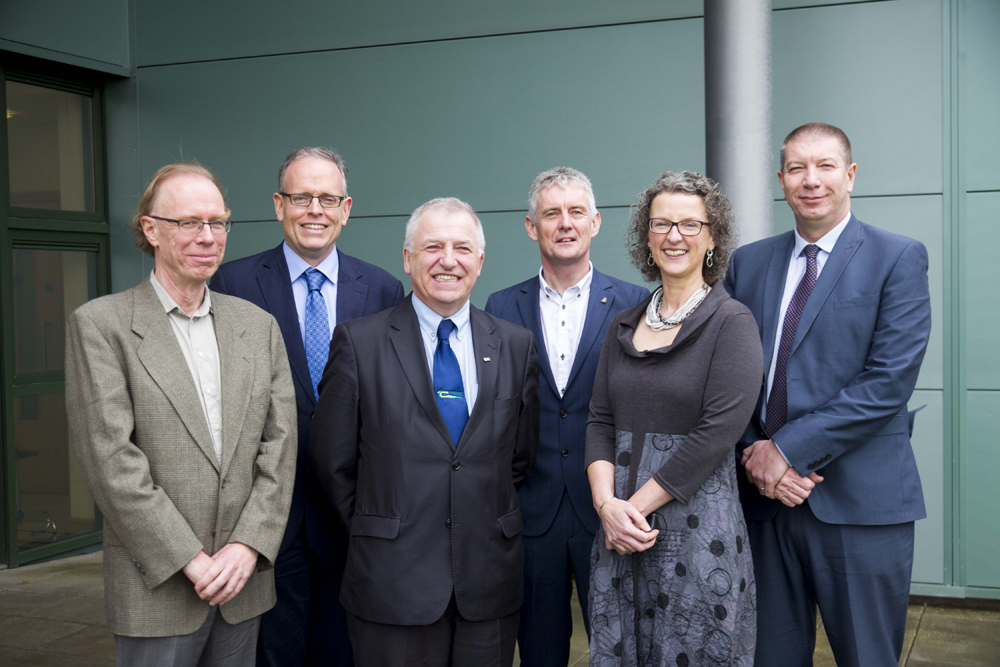 Dr Alan Sloane, UCC; Dr James McIntosh, safefood; Prof. Gerry Boyle, Teagasc; Dr Seamus O’Reilly, UCC; Ron McNaughton, Food Standards Scotland and Prof. Maeve Henchion, Teagasc at “Food supply chain integrity on the island of Ireland: the potential of blockchain technology” seminar at Teagasc Ashtown. “There is a lot of hype about the technology and companies are very interested in seeing how it works, and some of the larger companies have even dipped their toes in the water with some commercial (tech/consultancy) companies to see how their company can be used as a use case,” Prof. Maeve Henchion, Principal Research Officer at Teagasc (Ireland’s Agriculture and Food Development Authority) tells FoodIngredientsFirst.

“The food industry is a low margin industry so once the hype dies down a bit, companies will have a stronger focus on how the technology can address their current needs rather than going along with the hype. They will focus on how the technology can add value to their business so that they can identify the right use cases. It will not be appropriate in all cases,” she adds.

For Henchion, blockchain needs to be seen in the context of the broader digitization of agriculture and food. “Having said that, however, perhaps the biggest potential is in the area of sustainability and claims that differentiate the product on the basis of enhanced sustainability, i.e., what we call credence attributes whereby consumers/customers need to believe an attribute is present rather than actually being able to verify it for themselves (e.g., claims that a product is organic rather than attributes that they can see relating to color, size, etc.),” she says.

Henchion notes a pilot scheme in the organic sector in Ireland involving the blockchain company Origin Chain and Glasson Farm. With 1.6 percent of Irish farmland certified organic (73,000 hectares) and 1,700+ organic producers registered across four certifying bodies, blockchain technology can help offer an additional traceability guarantee back to the farm.

Increasing globalization and pressures to reduce costs and improve efficiencies, has increased food supply chain complexity, and given rise to concerns about black swan events – high impact but low probability events. These conditions increase food firms’ vulnerability to adulteration of products through both fraud (for economic gain, e.g., the horsemeat scandal) and threat (for psychological or ideological reasons). 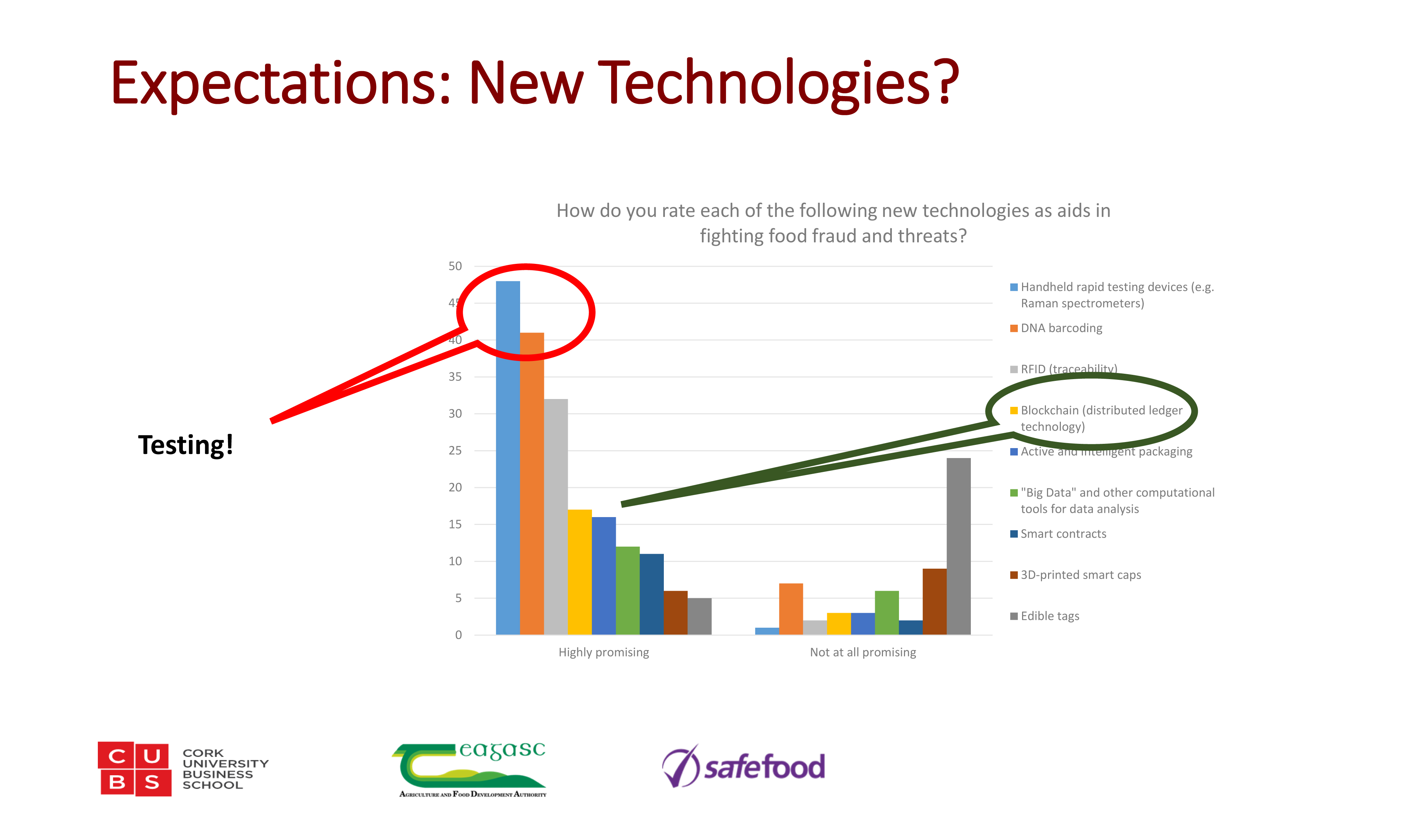 Results from the all-island industry survey were presented
by Dr. Alan Sloane from UCC.The challenge of, and potential solutions to, such events were addressed by a recent safefood funded collaborative University College Cork-Teagasc research project. The findings were the topic of a one-day seminar held at the Teagasc Food Research Centre, Teagasc on Thursday, 6 December. A diverse audience gathered to hear the results of an all island of Ireland industry survey, case studies of initiatives in four other OECD countries, a keynote speaker from the Food Crime Unit at Food Standards Scotland and experts in blockchain technology.

Opening the workshop, O’ Reilly highlighted the emergence of food supply chain resilience as a key issue in recent years. In addressing this, discussion focused on prevention, investigation and enforcement. Sharing and exchanging information emerged as important to this, as did putting in place vulnerability assessments and related countermeasures.

Dr. James McIntosh from safefood said: “We wanted to understand the perspectives of the food industry on the island of Ireland with regard to these concerns and to see if we can learn from other jurisdictions. Some European countries seem to be quite advanced in this space and the US is focused on the issue from a national security perspective.”

Results from the all-island industry survey were presented by Dr. Alan Sloane from UCC. He reported that companies on the island of Ireland are aware of these threats and are being proactive in addressing them. Three out of four respondents reported that they had systems, or processes in place to specifically deal with adulteration and/or misrepresentation. The primary motivation for seven out of ten respondents for doing this is to ensure consumer protection with direct costs to the business motivating a further two out of ten respondents.

Learnings from the UK, the Netherlands, Denmark and the US were reported by Prof. Maeve Henchion of Teagasc. “Government agencies, commercial companies and the food industry in these countries are putting a lot of resources into this area. Building trust between legitimate food companies and the regulatory agencies is a key focus of activity,” she noted. 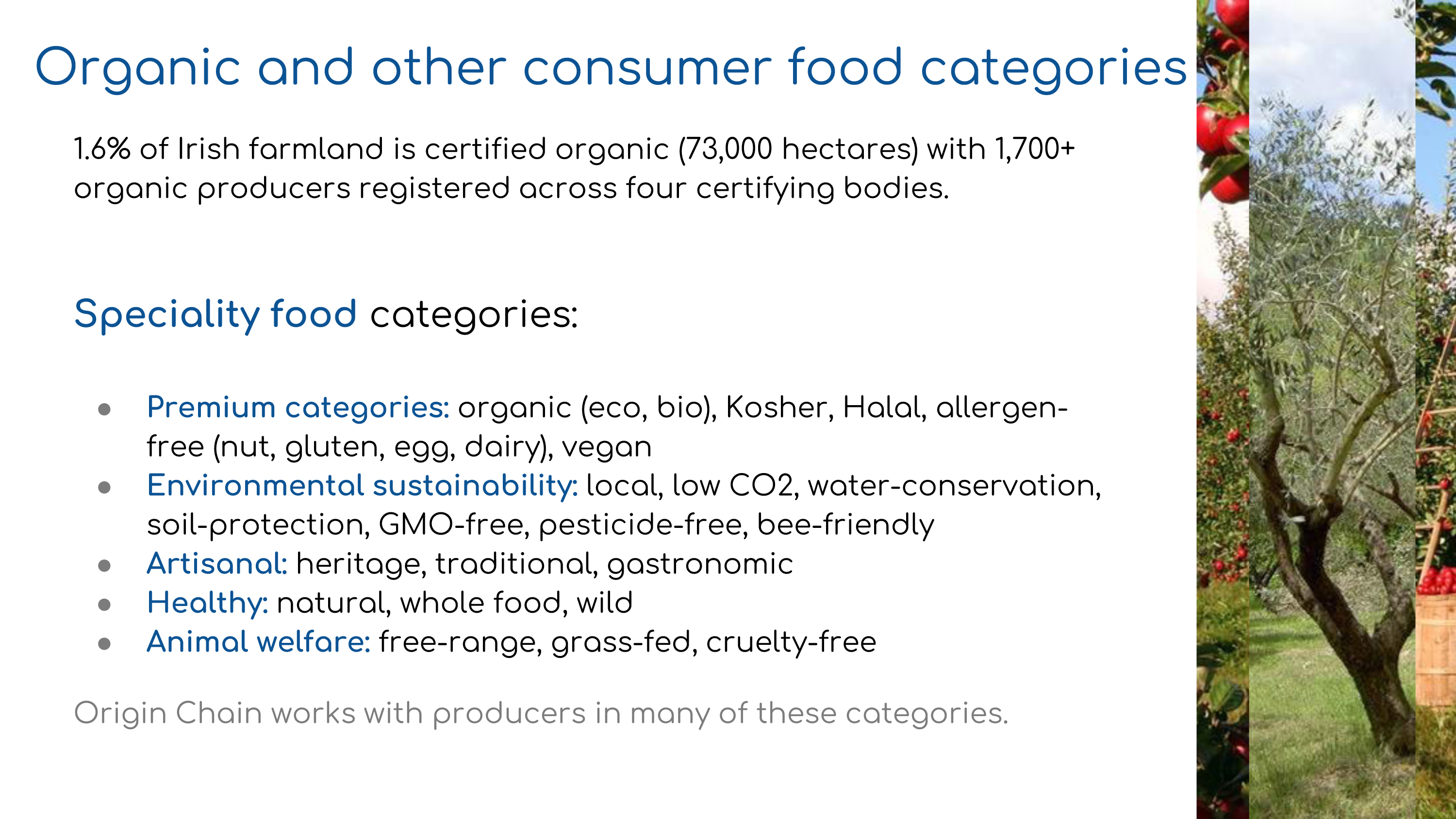 With 1.6 percent of Irish farmland certified organic (73,000 hectares) and 1,700+ organic producers registered across four certifying bodies, blockchain technology can help offer an additional traceability guarantee back to the farm.“Food crime costs £1.17 billion (US$1.4 billion) to the UK economy,” said Ron McNaughton, former senior police officer and head of the Scottish Food Crime and Incidents Unit at Food Standards Scotland. “To address this we have set up a crime unit with 10 staff currently dedicated to the investigation of food fraud. We are working closely with partners across UK, Europe and with industry to tackle this issue and over the last few years have taken part in Operation Opson, which is a Europol and Interpol joint operation targeting fake and substandard food and drink,” he added.

Recent scares suggest that blockchain can help full traceability back to the exact location on the farm.

Last month, the US and Canada were shaken by yet another E.coli outbreak; this time for Romaine lettuce. In an update on December 13, the US Food and Drug Administration (FDA) said it had further refined the traceback investigation down to the farm level, which narrows the list of romaine growing areas that FDA recommends consumers and retailers avoid down to the following counties: Monterey, San Benito and Santa Barbara. San Luis Obispo, Santa Cruz and Ventura counties in California have been removed from the list at this time. Other growing areas, for example Florida, Mexico and the desert growing regions near Yuma and Imperial County, Riverside County, do not appear to be related to the current outbreak.

Investigation teams from FDA’s Produce Safety Network, California Department of Public Health, California Department of Food and Agriculture and the CDC analyzed romaine lettuce, soil, water, sediment and animal dropping samples at farms identified by the traceback investigation. Most of these samples tested negative for the outbreak strain, with some samples still undergoing analysis. However, the strain of E. coli O157:H7 causing the current outbreak was identified in one sample collected in the sediment of an agricultural water reservoir at one ranch owned and operated by Adam Bros. Farming, Inc., in Santa Barbara County. The strain isolated from this sample matched those collected from ill persons in this outbreak using Whole Genome Sequencing (WGS).

The FDA confirmed that Adam Bros. Farming, Inc. hasn’t shipped any romaine since November 20, 2018. Experts are working with the farm to determine how contamination occurred and what corrective actions need to be taken before their next growing season. “Adams Bros is cooperating with the FDA and CDC in this outbreak investigation. They have committed to recalling products that may have come into contact with water from the water reservoir where the outbreak strain was found,” the agency reports.

The news and complexity of the supply chain highlights the growing role for blockchain technologies in traceability, with pressure already mounting on suppliers from their retail customers.

In his presentation, O’Reilly noted that in January 2018, Maersk and IBM announced the intention to establish a new blockchain. Since the collaboration started in June 2016, multiple parties have piloted the platform including DuPont, Dow Chemical, Tetra Pak, Port Houston, Rotterdam Port Community System Portbase, the Customs Administration of the Netherlands and US Customs and Border Protection.

Amid the background of E. Coli food safety scares around lettuce, in September 2018, Walmart said it was lauding the benefits of tracking lettuce and spinach through the supply chain through the use of blockchain. Walmart and Sam’s Club are urging lettuce and spinach suppliers to contribute to a blockchain database that can quickly and efficiently identify contamination.

Their suppliers resultantly received a letter requesting that they trace their products all the way back to the farm using blockchain technology. Walmart says suppliers are expected to have all these systems in place by September 2019. All fresh leafy greens suppliers are expected to be able to trace their products back to farm(s) (by production lot) in seconds – not days. To do this, suppliers will be required to capture digital, end-to-end traceability event information using the IBM Food Trust network.

In November 2018, it emerged that French retail giant, Auchan, had implemented TE-FOOD’s blockchain based farm-to-table food traceability solution in France, with further international roll-outs expected to follow in Italy, Spain, Portugal and Senegal.

But beyond retail and food safety, there is also a more fun marketing side to blockchain too. For example, in summer 2018 and in a first for the beverage industry, Crown Bevcan Europe & Middle East launched its CrownConnect technology in conjunction with UK-based FACT – an all-natural sparkling drink. Each can is marked with a 2D unique scannable code, making FACT beverage cans the first ever to be produced with a unique digital identity. The product was displayed as a key innovation at BrauBeviale 2018. Downstream (launched in November 2017) is claimed to be the first beer to use blockchain technology, “revealing everything you want to know about your beer, its ingredients and brewing methods.”

O’Reilly also highlighted the recent example of a pilot adoption of this technology included Ben & Jerry’s launch of a blockchain initiative to let customers offset their carbon footprint at a London ice cream shop opened this summer. While Ben & Jerry’s have pledged to purchase carbon credits to offset the negative impact of each scoop, customers are also invited to offset their purchase as well by donating an additional penny. By the end of the one-month pilot, Londoners had helped save 1,000 trees, covering the equivalent of 77 tennis courts.

Henchion stresses that despite the hype, uptake of blockchain needs to be seen in context. “Certainly there is a lot of talk and Walmart, Albert Heijn and other retailers are bringing the technology in to certain supply chains. While this has heightened expectations, it may not be an indication of a longer term trajectory. For example, RFID [Radio Frequency Identification] didn’t take off as planned when Walmart asked their suppliers to use it. While RFID does play a role in Walmart supply chains, it is nothing like it was originally envisaged,” she concludes.