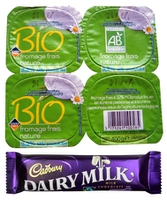 17 Aug 2009 --- Launches of products marketed on an ethical platform rose by about one-third in the first half of 2009, and sales generally seem to be faring better than those of organic foods.

17 Aug 2009 --- While the Innova Database records increasing levels of new product activity overall in the first half of 2009, the recession is now reportedly starting to bite in some areas. Particularly some previously dynamic higher-added-value sectors, such as organic foods and ethical, particularly fairtrade, foods look set to show decreased activity. According to Innova Market Insights, both sectors saw the number of launches rise over the January to June 2009 in comparison with the same period in 2008, but while sales of organic foods appear to be having problems in many markets, the much smaller fairtrade foods still seems to be maintaining a growth pattern.

While 2008 brought growth rates of organic foods down from the stellar levels of previous years, the market still grew overall, with a global market now in the region of US$44bn a year. US sales of organic foods, for example, saw growth at its lowest level since 2004 according to the Organic Trade Association, but it still managed a double-digit increase to nearly US$23bn to give it an all-time-high near-3.5% share of the total US food market. In Europe, growth rates were more mixed, varying from over 20% in the German grocery market to just 2% in the UK market through the multiple retailers.

The story appears to be changing in 2009, with falling sales of organic foods recorded in most markets, as consumers start to trade down as a result of the recession. This had already started in the second half of 2008, but has become much more obvious in the first half of 2009. It has been particularly evident in relatively well-developed markets, such as the UK, where take-home sales of organic foods fell by over 10% in the year from June 2008 to May 2009. This has not yet been reflected in levels of new product activity, however, with the Innova Database recording that the number of organic launches globally rose by over 30% in the first 6 months of 2009, in comparison with the same period of 2008, with UK launches rising by a lower, but still impressive level of nearly 10%.

Launches of products marketed on an ethical platform also rose by about one-third in the first half of 2009, and sales generally seem to be faring better than those of organic foods. Most of the launches are focused on environmental initiatives, such as recyclable packaging, etc., but there is also a rising demand for fairtrade products, a sector which saw launch numbers more or less double in the first half of 2009 over the same period in 2008. It is a much smaller and less developed market than organic foods, of course, and some of the growth in the market does also reflect companies’ strategic moves into taking a more sustainable stance, with fairtrade logos appearing on an increasing number of products, including mainstream lines, with Cadbury’s UK introduction of its market-leading Cadbury Dairy Milk bar using fairtrade cocoa one of the most high-profile initiatives of the year to date, along with rival Mars’ collaboration with the Rainforest Alliance in terms of its global cocoa supply.

Recent information from the Fairtrade Foundation indicates that the global fairtrade products market rose over 20% to nearly EUR3bn in 2008, with particularly strong growth in Australia and New Zealand, Canada, Finland, Germany, Norway and Sweden. Sales in the more developed markets of the UK and the US grew by a more modest, but still very encouraging 43% and 10%, respectively. Even in the current economic climate, further growth is forecast for 2009, with the UK market, for example, forecast to rise a further 15%.

“It seems that consumers, despite cutting back, do still have a heart for fairtrade and ethical issues, while the much larger organic foods market has been suffering not only from its increasing maturity, but also from consumers no longer able or willing to justify the higher prices involved,” says Innova Market Insight’s Head of Research Lu Ann Williams.

“The fairtrade market is still much smaller and less developed,” she contends, “but probably has a broader ongoing appeal to consumers as ethical issues remain important despite the recession. Fairtrade has also been helped by some major companies taking on fairtrade classification for more mainstream lines and by retailers taking decisions in some instances to make whole ranges of products in their stores fairtrade, such as bananas, sugar, etc., and thus reinforcing fairtrade in some instances when consumers might not pay the extra if offered a choice.”

06 May 2021 --- Despite increasing concerns over animal welfare, when consumers feel guilty about eating meat, they don’t eat less of it. This is according to new research... Read More

20 Apr 2021 --- Meat giant JBS has signaled its intention to be a much bigger player in the plant-based space by agreeing to purchase Vivera, Europe’s third-largest... Read More